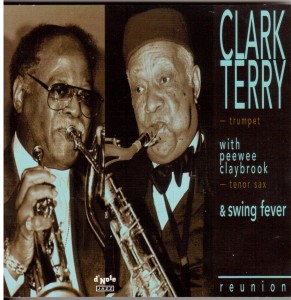 For those intrigued by my Clark Terry – Pee Wee Claybrook story, I’m including the following plucked from my original 1995 Reunion CD liner notes. In shorthand it characterizes a corner of jazz that was completely unknown to me before meeting Pee Wee. Maybe it will interest you.

As the Streckfus Line paddlewheel steamers plied the Mississippi and Ohio Rivers, Fate Marabel’s bands variously employed Louis Armstrong, Henry Red Allen, Pops Foster, Johnny Dodds, Baby Dodds and Zutty Singleton. In the late ‘30s, Pee Wee Claybrook played saxophone on the Ohio with Fate Marabel on the piano and Jimmy Blanton on the bass, a happy combination ending when Duke Ellington discovered Blanton and turned him into one of the most durable jazz legends. St. Louis was always a great spot for the Duke, or Basie, or Cab Calloway, or Jimmie Lunceford to swoop hawk-like into town and leave with several of the best players in their talons.

But no raid equaled Uncle Sam’s WWII sweep. On a single day 80% of George Hudson’s band, as well as large chunks of Jeter and Pillars and the Blue Devils were torn away, devastating St. Louis jazz. Thrust together in the Great Lakes Naval Training Station Band, Pee Wee Claybrook and Clark Terry cemented their friendship. The band also included altoist Willie Smith, fresh from Jimmy Lunceford, as well as arranger Gerald Wilson. In 1944 Pee Wee and Clark’s paths separated, with Pee Wee transferring West to join the St. Mary’s Preflight Naval Band in Moraga California, where he played with Ernie and Marshall Royal, Buddy Collette and Jerome Richardson.

When he mustered out at War’s end, the cracks in the big band era were already showing. Pee Wee wrote Clark to say he decided to stay in the San Francisco Bay Area. Clark wrote back that he was rejoining George Hudson’s band in St. Louis. Another letter announced a change to Charlie Barnet’s band. A year later he joined Basie, and then, in 1951, Clark joined Duke Ellington. Pee Wee played with Earl “Fatha” Hines in San Francisco while keeping his day gig. In the late 1980’s their friendship turned 50. By 1994 Pee Wee Claybrook had been playing with Swing Fever for 10 years.

As Pee Wee neared his 83rd year the idea of a recording reuniting Clark Terry and Pee Wee Claybrook took shape. Clark jumped at the chance. The tapings were made on three successive evenings in January 1995, at Mobias Studio, San Francisco, by recording engineer David Luke and legendary jazz producer Orin Keepnews. Recording again with Clark Terry with whom he made many records in the early Riverside Record days.